Sheet music for “Der tanzende Tor”, a song composed for the early Nordisk production “Klovnen” (1917). Of particular interest is the inscription at the top…”Herrn Generaldirektor Oliver in Verehrung zugeeignet”. You can watch a small extract of “Klovnen” here courtesy of the University of Wisconsin’s database. 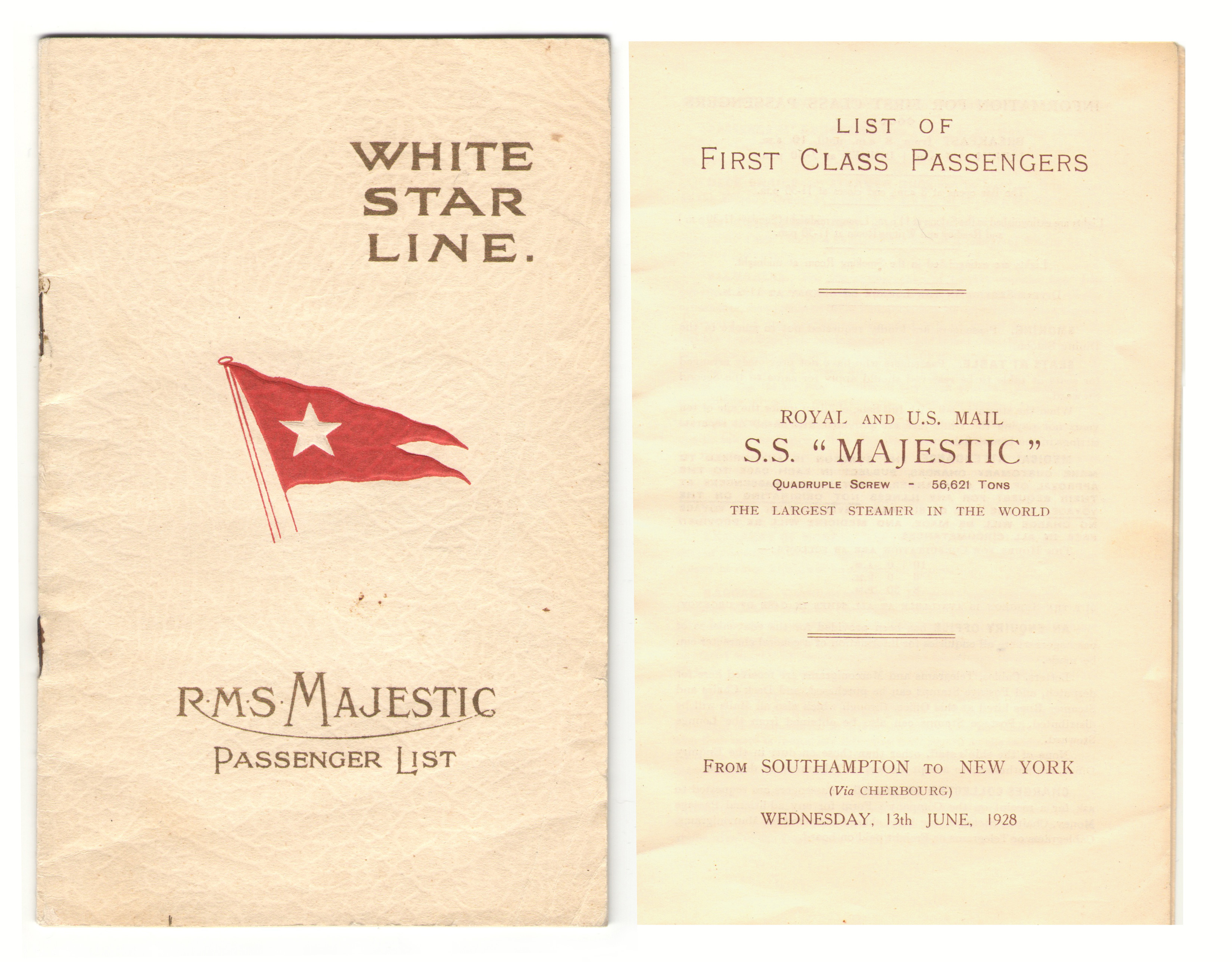 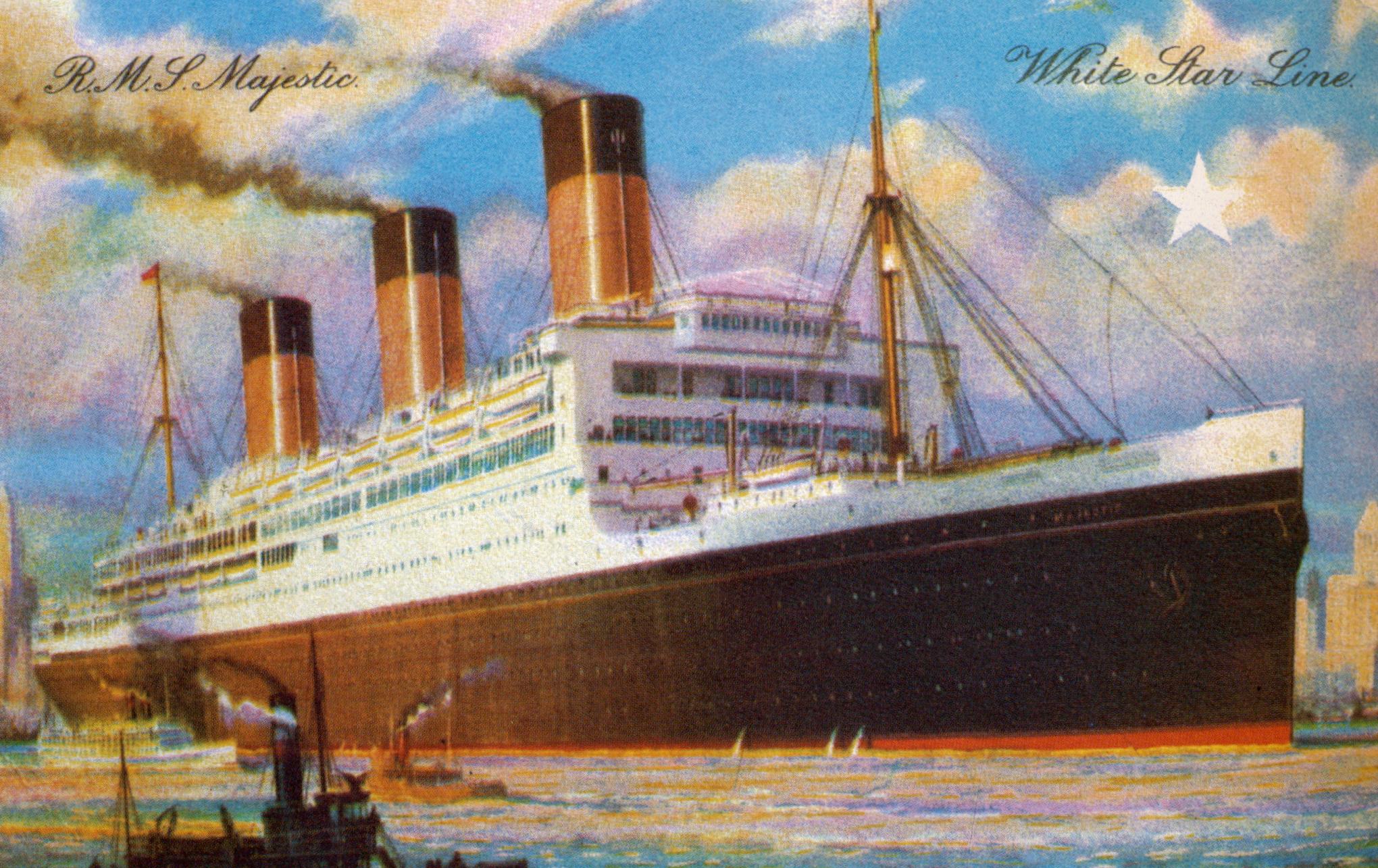 On board are film producer David Oliver and his wife, Edith Oliver. 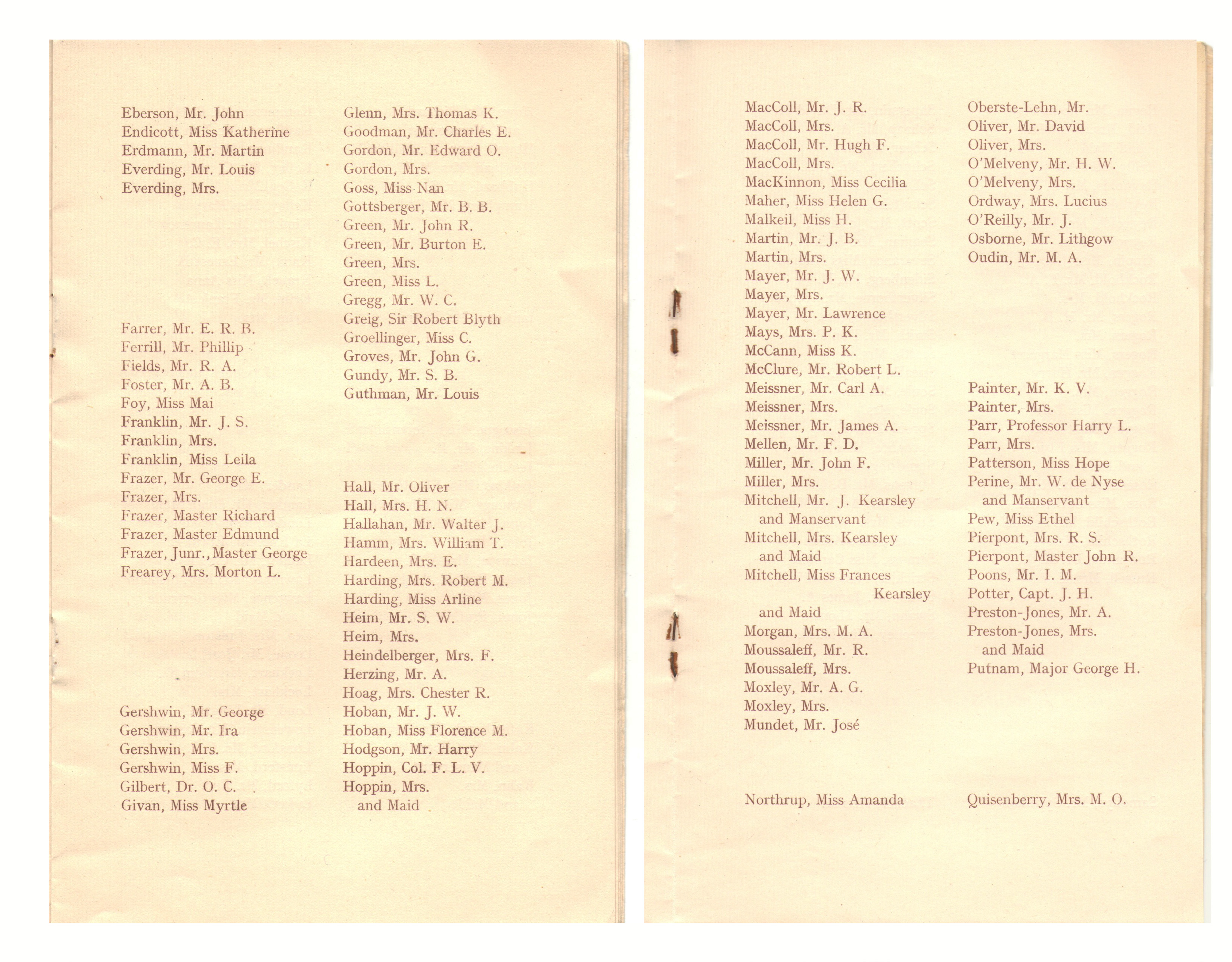 Avid bridge players, they would always make it a point to scan the ship’s list for any suitable fellow passengers willing to “make up a rubber”.

On this particular journey they would be joined by some illustrious fellow passengers.

Founded in 1933, “Ibérica Films S.A.” was a Barcelona film company famous for their 1934 production “Doña Francisquita”.
For the Jewish exiles expelled from the nazi-controlled German film world, Ibérica was both film production company and underground railroad, providing employment to those who had nowhere left to run. The story of their tenacity and courage is almost impossible to believe.

For ninety-seven years, the jagged shadows of The Cabinet of Dr. Caligari have swept across the imagination.
For myself, as the Vancouver-born grandson of David Oliver, one of the film’s original producers, Caligari is much more than a screen classic; it is a family heirloom that carries with it a strange curse. On Saturday, Nov. 12th, the Pacific Cinematheque will host a very special screening of this 1920 Expressionist masterpiece accompanied by a live musical performance by the Oliver-Film Ensemble. Please join us for an evening of extraordinary music, beauty and mystery in what can only be described as a “cinematic séance”.Where: Vancouver Cinematheque 1131 Howe st. Vancouver, Canada
When: Saturday, Nov. 12th @7 p.m.
For tickets and information click hereBackground Info
Founder of Germany’s legendary UFA Studios, David Oliver was a man for whom the term “movie mogul” might’ve been created.
The producer of over 200 silent films, he once controlled a cinema empire that stretched from Budapest to Amsterdam.
In 1934, after a Berlin bomb attack by Nazi assassins, he vanished without trace.
In 2011, his papers were re-discovered in a Vancouver basement.David Oliver literally belongs to the founding generation of German film producers…
Jan-Christopher Horak
-Director of UCLA Film & Television Archive

What did a producer in the early days of cinema do? He invented what a producer was…

Vancouver January 2011:
The canvas upon which we create the story of our identity is never blank. We grow up assuming we have the power to define ourselves, when in reality the past is clouded with secrets and nothing- including our very selves is what it seems.

What if the picture behind you shifted and, all of a sudden, you were no longer the person you thought you were? What if you were to discover that everything you knew about your family’s origins was a fabrication?

Five years ago this happened to me when a suitcase was discovered in the basement of our Vancouver home. We opened it to find papers belonging to our grandfather identifying him as film producer of Expressionist masterpiece The Cabinet of Dr. Caligari, and placing him at the center of a vast sphere of influence as founding director of Germany’s UFA Studios.

How could we explain the papers describing his survival from a 1934 Nazi assassination plot? Far from merely revealing the last testament of a movie mogul, the Pandora’s box contained a secret, one which our own father had kept from us: We were a family of Jewish exiles who’d erased their identities in a bid for survival.

END_OF_DOCUMENT_TOKEN_TO_BE_REPLACED

The career of my grandfather is shrouded in mystery; no aspect more so than that of his time within the British film world of the late 1930’s at Denham Film Laboratories.

All of my previous attempts to discover the facts proved utterly useless. Apart from an obscure reference to David Oliver’s business relationship with Sir Alexander Korda in Rachel Low’s Film Making in 1930’s Britain-(Harper Collins 1985) there is no proof of David Oliver’s involvement in the British cinema. Only after a random search for details of his U.K. naturalization did I accidentally stumble upon a secret dossier within the British government’s archives. Marked “dangerous to relatives and other living persons” the files are over 300 pages long and were sealed on Jan 1st, 1954… not to be opened for 100 years.

What I have discovered is beyond belief. 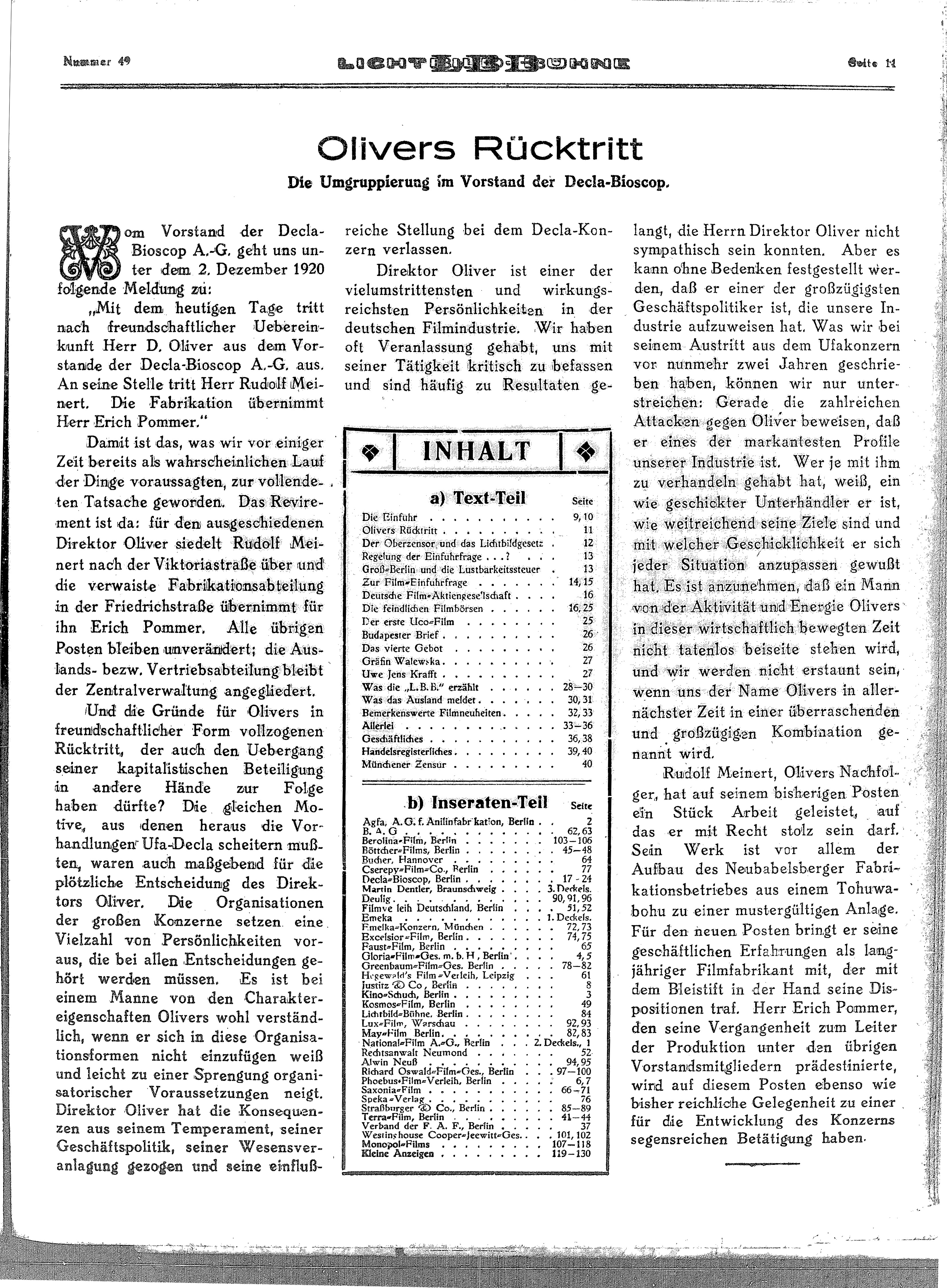 On December 2nd, 1920, we received the following message from the board of the Decla-Bioscop Film Company:

As of this day, Mr. D. Oliver has resigned from the board of Decia-Bioscop A.G. He is to be replaced by Mr. Rudolf Meinert. Mr. Erich Pommer takes over the factory…

And so what we have previously foretold, as a probable course of events some time ago has now become fact. The reversal is complete: Rudolf Meinert will move to Viktoriastrasse in place of the exiled director Oliver and Erich Pommer will take over the orphaned film factory department in Friedrichstrasse. All other items remain unchanged; foreign trade and distribution will remain affiliated under the central administration.

And the reasons for Oliver’s friendly resignation, which will undoubtedly lead to the transfer of his capitalist participation into other hands?…the same motives from which Ufa-Decla’s predecessors had failed, were also deciding factors in the sudden decision of Director Oliver. The organizations of the big corporations presuppose a multitude of personalities, all of whose voices must be heard on all decisions.

It is quite understandable if a man possessed of the characteristics of Oliver cannot fit into these forms of organization and that he should so easily tend to break up organizational presuppositions. Director Oliver acted upon the consequences of his temperament, his business policy, his disposition for his nature and left his influential position within the Decla Group.

Director Oliver is one of the most controversial and effective personalities in the German film industry. We have often had occasion to deal with his work critically, and have often arrived at conclusions not always sympathetic to Mr. Oliver. But it can be said without hesitation that he is one of the most generous business politicians in our industry. What we have written two years ago when he left the Ufa Group, we can only reiterate here: the numerous attacks against Oliver prove he possesses one of the most distinctive profiles within our industry. Whoever has ever had to deal with him knows how a skillful a subcontractor he is, how high his ambitions are and how he has adapted himself to every situation. It is to be assumed that a man of such activity and energy will not stand idly aside in these economic times, and we shall not be astonished when the name Oliver will in a very short time be mentioned again and in a no doubt surprising and generous combination.

Rudolf Meinert, Oliver’s successor, has done a bit of work on his previous post, which he can rightly be proud of. His work is above all the construction of the Neubabelsberger factory transforming it from a land without shape or form into a model plant. Into his new post he brings his business experience as a long-time film maker, with his pencil in hand, his dispositions. Mr. Erich Pommer, whose past has predestined him as head of production among the other members of the Management Board, will have ample opportunity in this position, as well as hitherto, for the development of the Group.

Here is an interesting article (written in Portuguese) I recently came upon in an issue of “A União” dated March 13, 1921: 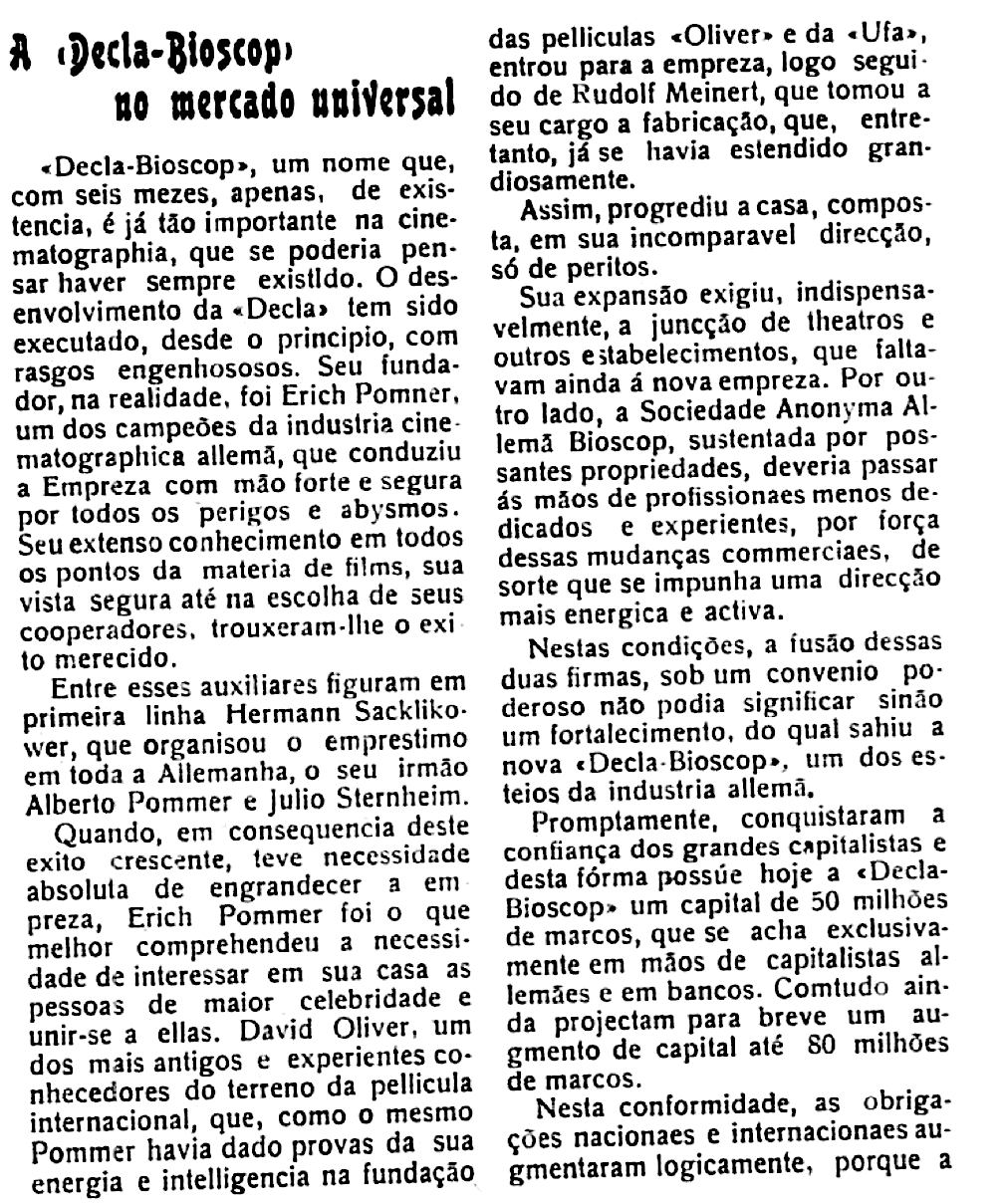 Those of you who are only fluent in English  can get the financial details here: 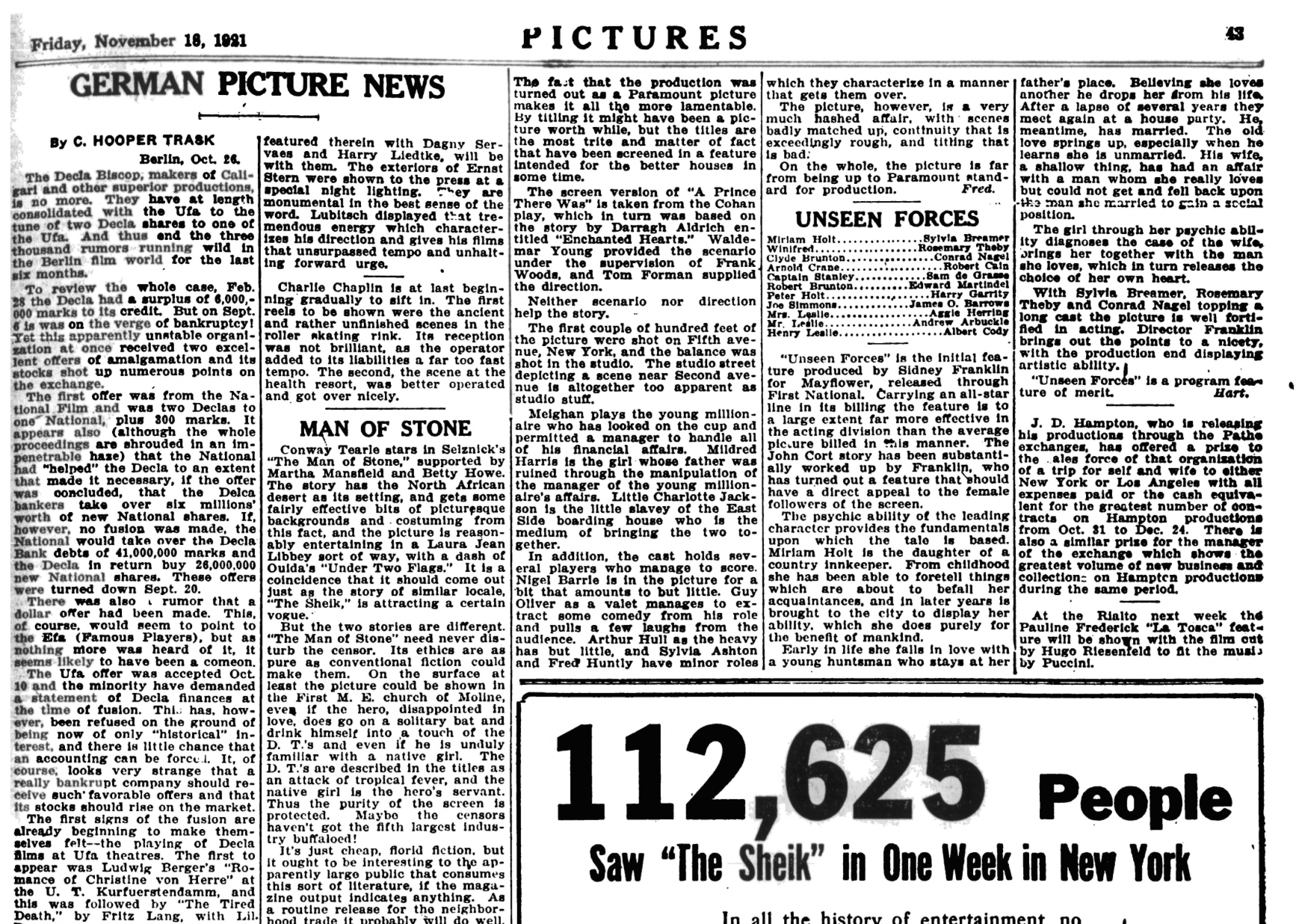 On April 10th, 2016, as part of the awareness-raising campaign on behalf of the documentary UFA MAN- The Hidden Life of Film Pioneer David Oliver, the Vancouver International Film Festival hosted a screening of Robert Wiene’s Genuine. Here is a short film we made to document the extraordinary music performed by the Oliver-Film Ensemble. Many thanks to Daniel Ruiz, Marc Wild, Matt O’Donnell, Justin Patterson and Vi-An Diep  and of course to our wonderful Vancouver audience… More dates to be announced soon!! 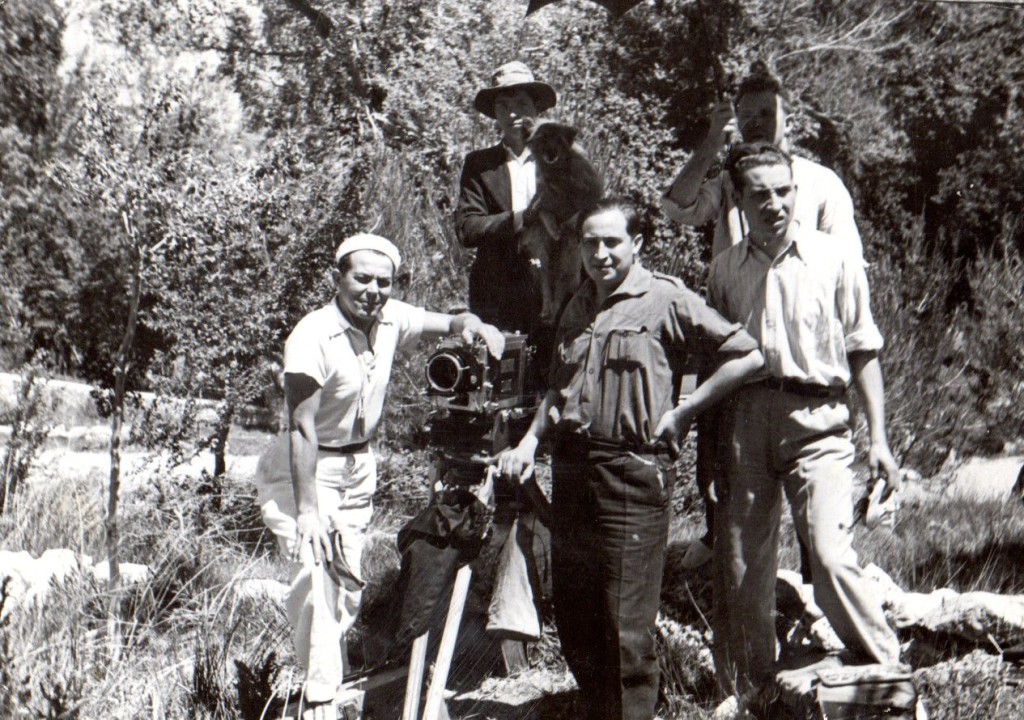 The godfather of Spanish cinematography, Heinrich Gärtner was one of the most important contributors to David Oliver’s Ibérica Films productions. The ex-Ufa cameraman is the fellow wearing a white beret. Here is an excellent article about Gärtner by Kike Narcea. 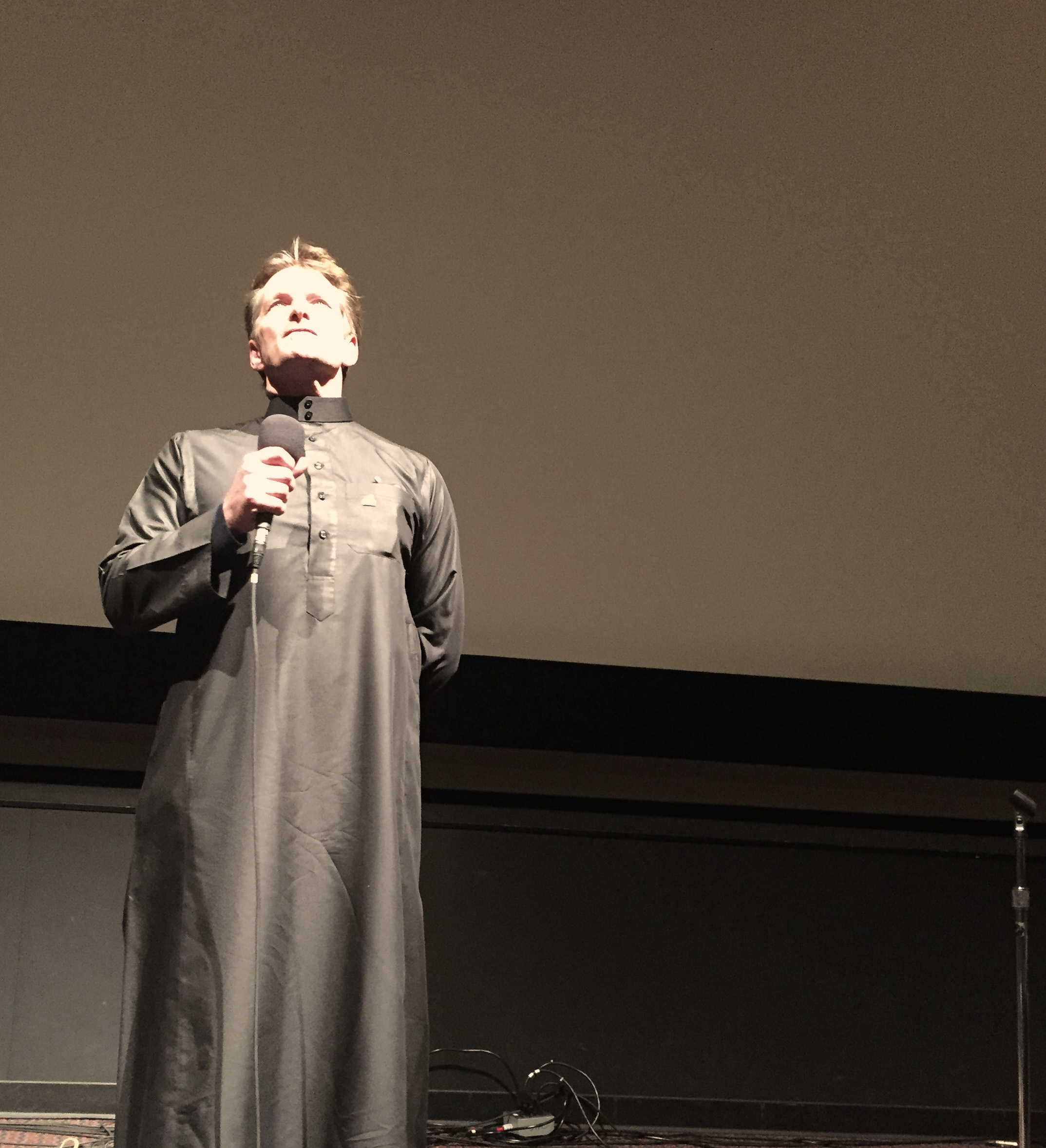 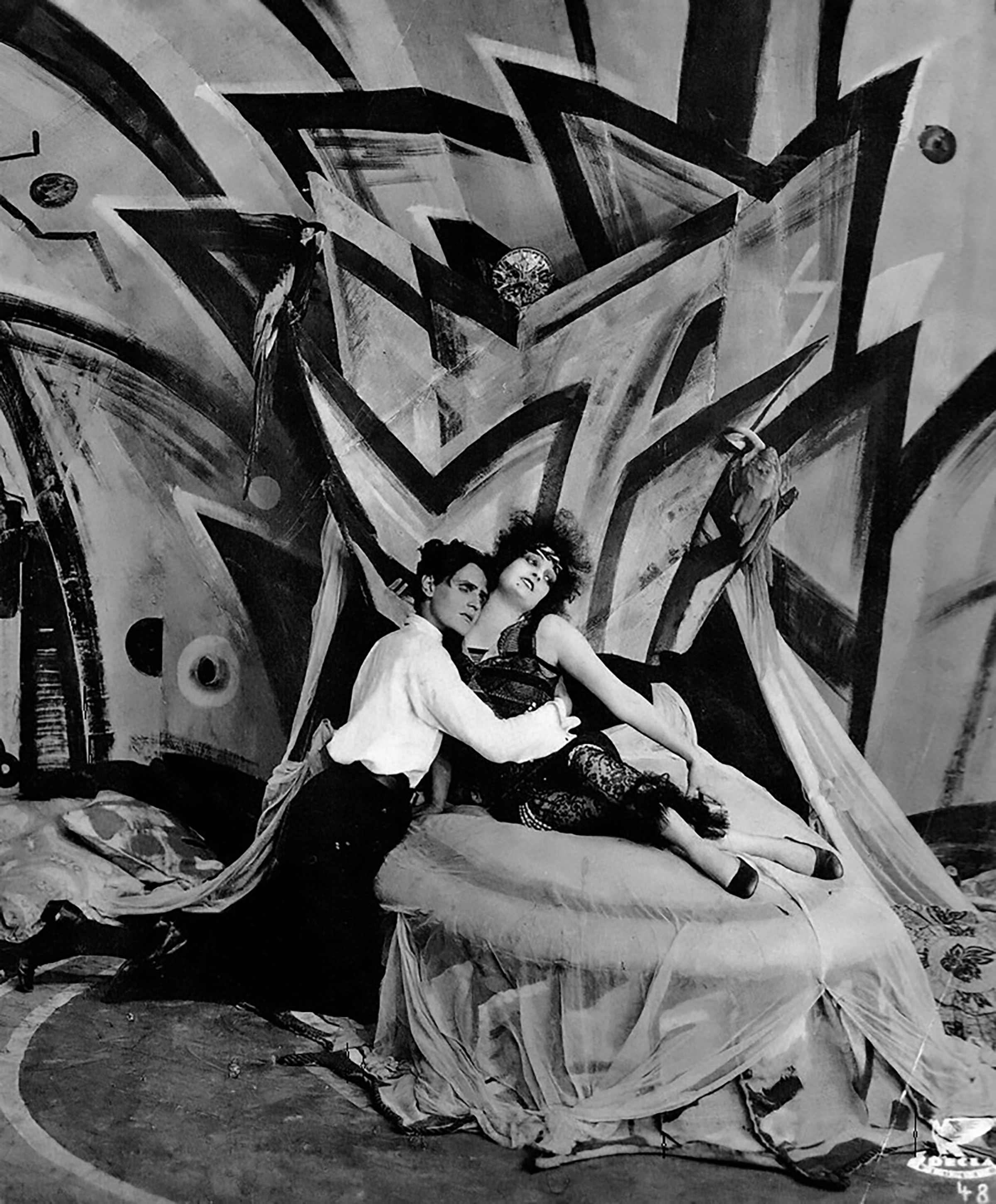 The little-known followup to Robert Wiene’s classic, The Cabinet of Dr. Caligari, Genuine is the story of a vampire femme fatale kept by a rich madman.

Produced by Berlin’s Decla-Bioscop company, Genuine has for many years existed only in fragments. Vancouver film maker Mark Oliver, grandson of one of the film’s original producers has taken on the task of painstakingly reassembling all known material to create a new, condensed version.

An opiated journey into a fantasy netherworld, no other film so closely evokes the spirit, (and decadence) of Weimar Berlin. Genuine must be seen to believed!

This special screening will feature live musical accompaniment by The Oliver-Film Ensemble:

An interesting article from The Moving Picture World, April 1916

Who knew there was interactive cinema in 1916? David Oliver’s Berlin film company reaches out to anyone with an original idea for a movie. The contest is unfortunately closed…for now anyways! 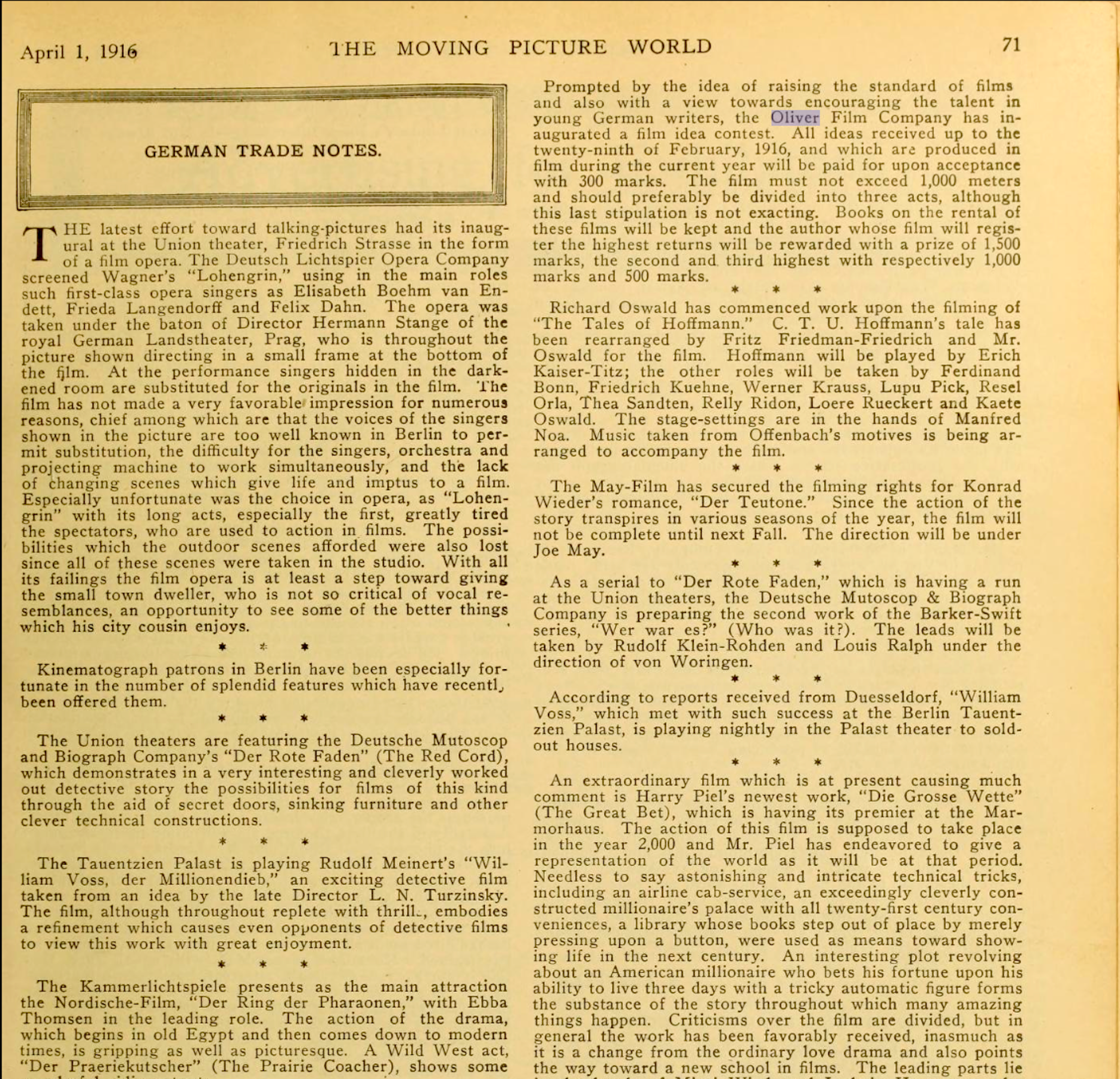 “Prompted by the idea of raising the standard of ﬁlms and also with a view towards encouraging the talent in young German writers, the Oliver Film Company has inaugurated a ﬁlm idea contest.  All ideas received up to the 29th of February, 1916, and which are produced in ﬁlm during the current year will be paid for upon acceptance with 300 marks. The ﬁlm must not exceed 1,000 meters and should preferably be divided into three acts, although this last stipulation is not exacting. Books on the rental of these ﬁlms will be kept and the author whose ﬁlm will register the highest returns will be rewarded with a prize of 1,500 Marks, the second and third highest with respectively 1,000 Marks and 500 Marks…”

A letter from Edith Oliver to the Aliens Department, Home Office. Her husband is now classified an “enemy alien” and is being held in Huyton Interment Camp, Liverpool. Suffering from extreme depression, many of his fellow internees will commit suicide. 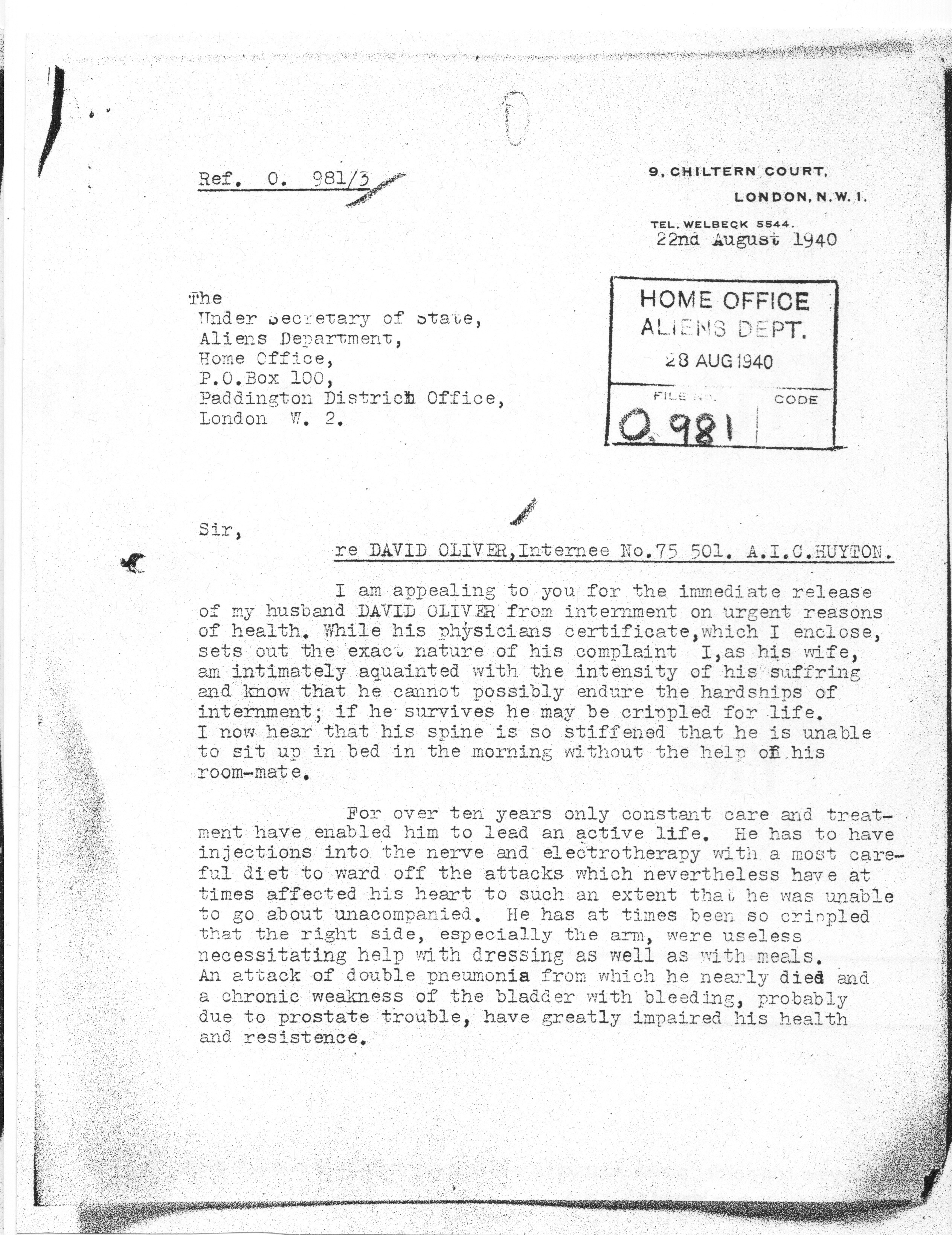 Are you ready for “Genuine”? Vancouver audiences will soon find out on Sunday, April 10th when UFA MAN presents this extremely rare, bizarre follow up to expressionist classic “The Cabinet of Dr. Caligari”….Here is the original 1920 poster by famed graphic illustrator Josef Fenneker. The Berlin Marmorhaus cinema was owned by David Oliver who co-produced “Genuine” along with Erich Pommer and Rudolf Meinert. Further details are on the way!